In celebration of the success of Zark’s Burger for their 8 anniversary business in the Philippines was the promo of P8.00 burger for  Zark’s Ultimate Burger.

Zark’s burger have made the announcement on social media which was effective as seen on the number of shares and likes on the marketing post shown below. It shows the good news for their 8th anniversary which was on August 28, 2017. The mechanics was stated and clearly says that the promo price of Php 8.00 is for the first 80 customers who can avail the Zark’s Ultimate Burger. It also includes other mechanics like: the promo will be available in all branches, one Zark’s Ultimate Burger per customer, no minimum purchase required, only appliocable for dine-in customers, first come, first served basis without any alowable reservation, and valid for cash transactions only (without use of other promotions and discounts).

Due to success of their burger meals, Zark’s P8.00 burger deal went viral as people are aware of the delicious offer that will happen on August 28, 2017 on any Zark’s branch. Interested customers arrived to the store and hoped to be served as first 80 customers. 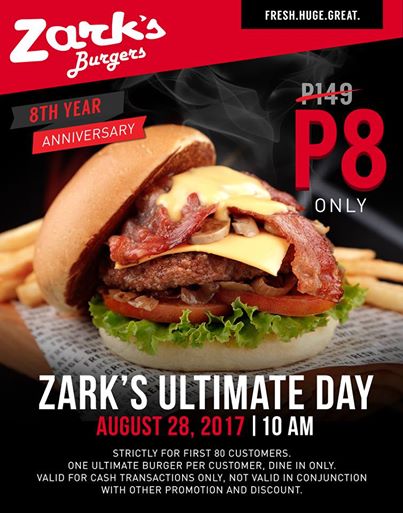 No one expected perhaps that the craze is real for these burgers. Zark’s P8.00 burger as seen on the image and videos shared by the netizens almost caused stampede. A view from the upper ground of SM San Mateo shows how people would flock infront of the store and when the door opens, has showed how unorganized and disordered the lines are. Normal waiting lines would be seen during normal day for Zark’s. but the video shows how everyone want to grab the Php8.00 burger. 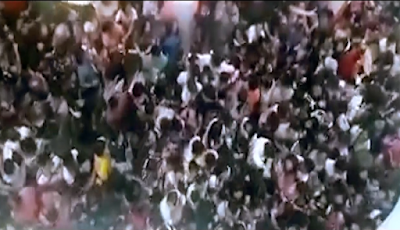 Videos from Facebook
https://web.facebook.com/HugotKingWD/videos/1701731409898424/
https://web.facebook.com/ed.gervas/videos/10210539236818311/
https://web.facebook.com/TeamJakeZyrusFans/videos/486812065015125/
The topic also became trending. Searching Zark’s burger on Facebook will show 100k+ are already talking about the entire promotion. Checking some videos draws some similarity to the train to busan movie zombie scene. Others would refer to the closing of a Zarck’s Burger and resumption of opening at 1;00pm on the same day as declared by Store manager under their discretion. The video showed a customer arguing with the store manager. Various comments are there and various points are raised about the incident.