What is a Piggery?

Piggery is a farm where pigs are raised or bred. It involves the raising of pigs for purpose of livestock meat production and can also be developed for pig breeding. We will present the statistics to support our analysis on the status of Philippine piggery business and hog raising this 2017.

Piggery is a lucrative business. Many backyard farmers started from small piggery that has a potential to grow into large and medium scale farms when properly managed. Piggery involves growing and selling of pigs. Pigs can be sold for their meat. The cost of meat in the Philippines has increased. Now the pork meat per kilo is Php180.00 to Php200.00 in July 2017 from the price at Php130.00 to Php140.00 back in March 2015. This turned out to increase the live-weight price per kilo of pork meat, which is an advantage to local piggery owners. Demand for pork is high, but the supply goes down as you will see on the data below. We all know that part of daily meat diet of Filipinos is pork, except for other religious traditions that discourage pork meat consumption. If you like to consider Halal and non-pork meat business, you can read more on Goat raising business. You may also refer to the local goat breeding (also known as kambing).

Swine production, as we see on the graph above, shows that commercial farms have lowering productivity. Backyard raisers, in contrary show robust growth rate. It is highly advisable to start on backyard scale to learn the piggery business and gain knowledge on this type of livelihood.

Backyard pig raisers on their backyard piggery enjoy the benefit of small scale management of pigs. The cost of rent and labor for large scale piggery is removed out of the picture when we look at backyard piggery. Most piggery in this setup is situated on a private land, and no rent is being paid for the lot in which the piggery is operating. Labor cost is also negligible as the owner may already be doing the pig raising task on a daily basis or the piggery runs as a family business. Family business backyard piggery means other families might help in the daily maintenance and care for the pigs. The cost saving from no rent and low labor cost is essential to backyard pig raising. Typically, the lack of capital or available money to invest on the expansion of the piggery limits the potential profit that can be earned from the piggery business. Many tried backyard piggery business and failed, large due to poor management and unsustainable practices that increases the cost of pig raising cost that eventually reduce the profit.

Commercial piggery or large scale hog farms are also enjoying the profitability of piggery business. Commercial farms may have 50 or more pigs in well ventilated housing with separate cages for gestating sows. Care is given to the pigs in various stage of its life to ensure faster weight increase and growth. Fattening pigs will be given enough food and nourishment to be able to meet the target weight after 4 months. Generally, the farming practice of artificial selection is implemented to spot and retain good hog traits such as good reproduction and mothering. Commercial piggery breed their own piglets and are not sourced from the market. They employ personnel to take care of the pigs as the large scale operation cannot be handled by the owner alone. 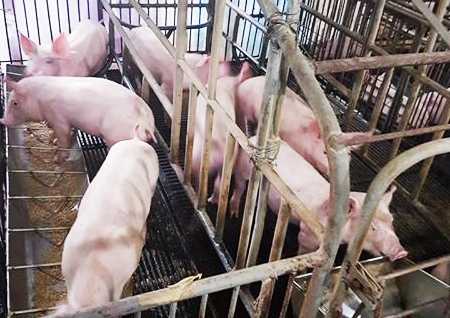 If you are already planning to get into the piggery business in the Philippines, do take note of the following tips.

Before you start in large scale piggery, try backyard raising first or get proper training. The cost of putting up the business is high since there is an upfront facility cost and operating expenses ahead of your profit from selling fully grown pigs. Learn to take care of the pigs like proper feed regimen and management, cleaning and sanitation, securing reliable water source, medication and quarantine, and sow gestation care. Hogs need water everyday. They need cool dwelling place and having available water for cleaning is needed. The feeds must be properly given to ensure growth by the the end of 4 month period. Medicines are available from local veterinary supply store. Vitamins are injected to the pigs if there is nutrient deficiency. There are stages in piglet growth and a stage to gain weight. This means pigs will have changing nutrient requirement. Use appropriate feeds for the pigs based on age recommendation:

Marketing the stock needs to be done correctly. There are many hog dealers that buys pig at a very low price compared to others. Build contact and see who offers better. Your gross income needs to cover for your total costs and your labor. Realizing this head-on is necessary since this is a business. Business needs to be profitable in order to become sustainable.