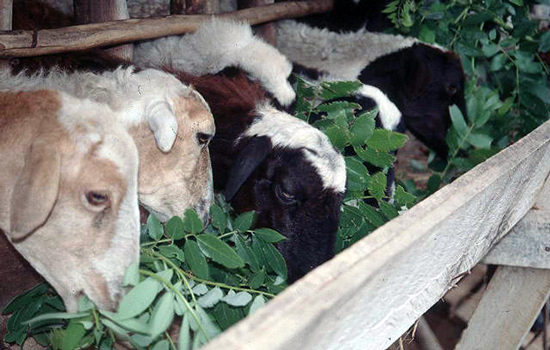 The name Madre de cacao is Spanish word. The tree grows up to 10 meters and have a leafy multiple spanning branches. The leaves are soft, while the trunk can become thick and hardwood. The tree is common in the entire Philippines and grows naturally in forests, hills, and vacant lots. It sheds leaves in late November to December. It starts flowering on February to March. The pink flowers bloom with non-aromatic scent and resembles the cherry blossoms. The fruit is elongated but not edible. The tree is poisonous for human consumption and will lead to toxicity if eaten. Madre cacao has been know for rodenticide property and anti-fungal property. It was now made into dog or cat mange cream.
The tree is common in the rural areas. Madre cacao leaves are rich in protein since the tree can fix nitrogen from the atmosphere. Madre de cacao can be turned into ruminant forage. It can be fed to cow, carabao, and goat as a supplemental food for protein. A limited amount will not harm animals, as the tree still has toxins and needs to be fed in moderation to farm animals. The evergreen leaves that grows all year around can be planted beside barn and be fed to goats, cows and carabao if the weather do not permit leaving the animals in the open field. The leaves can be complemented with ipil-ipil leaves and grass for in-house feeding for ruminants.
The leaves grow easily and can be a sustainable source of forage. The trees can be planted by stem, or by seeds. The branch will have buds that can eventually grow into the new stems and leaves of the plant. Planting this way can be used for easy propagation of the tree for preventing land erosion.

Madre de Cacao is normally used as a forage for cattle, sheep and goats.  Alternatively, it can be used as goat food in the dry season when the grass are not abundant.  The amount of feeding is 1 to 3 percent of body weight for goats. The supplementation level is variable at 20 to 50 percent as a common practice.  It has shown that approximately 25 percent live-weight increase have been reported for steers grazing Madre de Cacao in pastures, compared with steers grazing grass alone.  Dairy cows and buffaloes observations also showed slightly increased milk yield when concentrates were replaced by Madre de Cacao forage up to about 25 percent of intake.