Solar Energy in the Philippines

The abundance of sunlight as renewable energy is seeing application to the Energy sector as various investments for Solar Farms in the Philippines is being undertaken. Since Philippines is located near the equator and the intensity of light is more direct compared to high latitude countries, utilizing this free energy is ideal for the growing energy needs of the country as well as conservatory efforts for the environment by cutting fossil fuels for electricity generation. This year, Solar Philippines will invest over $150 M for new Tarlac facility( Conception, Tarlac). Together with the Department of Energy secretary Alfonso Cusi, groundbreaking ceremony of the company’s 150-megawatt (MW) project happened last March 17, 2017 eyed as the country’s largest solar farm composed of 450,000 solar panels.

In terms of residential applications, harnessing the sun’s power with solar panel is now affordable. Homeowners that plans to depend on energy from sunlight for their electricity can choose from various models and setup. First is the off-grid setup. In an off-grid system, the electric load from residential use of appliances and other electricity powered device are supplied with the electricity solely coming from array of solar panels typically installed at the room of the house with inverter and battery system. The output of the solar power system is computed to match with  electric load . Typically there is a considerable amount of initial cost of investment for this system. Second setup involves the use of on-grid electrification. Solar power generating equipment are installed to the house together with the grid hooked electricity. The benefit involves lower bill from the electric utility company due to free generated electricity from the solar panels being delivered into the load. This reduces dependence on grid electricity. For big residential installations resulting to excessive power output of solar power system, there is a renewable energy program of Meralco called net metering. Net metering allows households to sell back excess electricity generated by their renewable energy systems and use them as credits to lower their electricity bill the next month.

Choosing durable solar panels is the key to the return of investment of solar powered system. Monocrystalline panels are more efficient compared to polycrystalline panels. Polycrystalline panels tend to need to cover a larger surface to output the same electrical power as you would with a solar panel made of monocrystalline silicon. Supplier warranty needs to be lengthy since typical power delivery tend to degrade 15 to 25 years from start of usage. The longer you could expect your panels to deliver power, the better for this investment as it depends on saving money on electric bills with free electricity from the sun. Cost of maintenance goes to battery replacements and repairs. 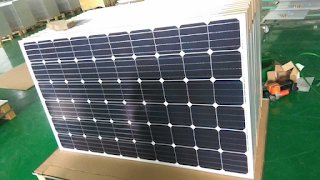