The resemblance of Philippine  native variety of goat to other goats in the South East Asia region is due to common ancestral genes that sets the morphological characteristics of these goats.

Kambing has the characteristic of smaller body built compared to Anglo Nubian or Saanen breeds from other regions. The selection of meat goats breeds in the region can be attributed to the tropical climate of South East Asia and the associated cost for meat production to farmers. These led to the characteristics of goat we have today. 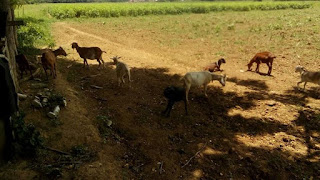 Goat was first domesticated from Ibex, and Bezoar lineages in the middle of 9000BC to 8000BC from the nomadic and semi-nomadic pastoralist from fertile crescent to Europe and East Asia. 200BC Aryan expansion lead to the introduction of goats to Indian societies. Current population of goat in Malaysia, Indonesia, and Philippines came as a result of introduction of goats from trade with these countries in 600BC. Kambing color is black or white primarily. Secondary color patterns appear in combination of brown or grey. Spots of the said colors can be seen as well. Milk production is just enough for the offspring that can be one to three kids per pregnancy of the does. As milk could not be intended for its production, meat is the main product being sold for these breed of goat.

Early maturity of these goats makes the goats gene an important resource. The meat characteristics is still not as developed as other breeds that yield more meat per animal, however considering the opportunity for cross-breeding will improve the current yield for meat of our kambing. There are already medium to large scale farms in the Philippines breeding Anglo nubian and Saanen crosses which are sold at a premium per kilo of live weight to interested breeders. Kambing as a business has been growing in the Philippines, but the demand is still high that goat raising is able to help our farmers with their needs. Forage management is also being seen as a way to increase goat meat supply in the country.

Why Lazada and other E-commerce are Growing in the Philippines

Top Reasons to Give Company Calendar