Jun 21, 2017
51.1k
SHARES
ShareTweet
Blogs are part of the internet. Whenever you try to seek information online, one of the top results by search engines are blog. Internet has been growing. From the time Tim Berners-Lee invented the World Wide Web in 1989, our eagerness for sharing has grown at an explosive growth. The spread is virulent. From its original intent as a universe of network accessible information, no one cant argue the impact of the technology to the information age. Universal access is like a dream when anyone can access a resource anywhere in the world any page you uploaded to the web. Its success is due to no dependence from a specific operating system, hardware or proprietary technologies as the information will be presented in a markup language that will be used for structuring and presenting content which lead to HTML5 as we know today.
Today, the World Wide Web doubles in growth rate in every 5 months. During early days, it doubles every 3 months. The growth was pushed upward by lowering cost of computers, improvement in the telecommunications, and growing base of computer literate individuals due to efforts of our education systems to integrate computer literacy in the basic school programs around the world. In order to connect, telecommunications infrastructure needs to address the needs. It is not surprising how telecommunications sector have grown with the advent of world wide web. It is the only driver that propelled infrastructure development which any government in the world deemed needed to keep up with our computerized information based economy. 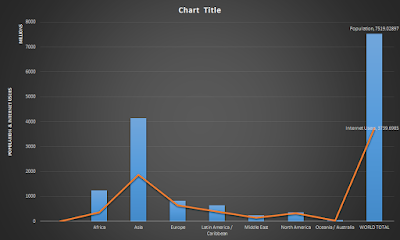 Shown above is the percentage of population using the internet. High percentage can be seen in Europe and North America at 77% and 88% respectively.

There are an estimated 4.47 billion webpages in the world wide web. There are estimated 345 million Tumblr blogs as of April 2017. WordPress have 74.6 million CMS using website and 37 million is hosted in free WordPress.com which are blogs. Blogger have not published their statistics yet, so knowing the total number of blogs as of 2017 is impossible at exact precision.

How to Upload to SlideShare to Boost Your Blog

4 Ways to Advertise and Earn from Blogging