Little known to us, Muscovy duck is the name of the large duck commonly grown in the Philippines. Muscovy duck (Cairina moschata) males about 76 cm (30 in) long, and can weigh up to 7 kg. Females Muscovy ducks are smaller, and can grow to 3 kg, about half the size of the male. We can see these ducks in  white and black, with the back feathers being iridescent and glossy in males, while the females are more drab. The amount of white on the neck and head is variable, as well as the bill, which can be yellow, pink, black, or any mixture of these colors. They may have white patches or bars on the wings, which become more noticeable during flight. Both male and female  have pink or red wattles around the bill, those of the male being larger and more reddish. 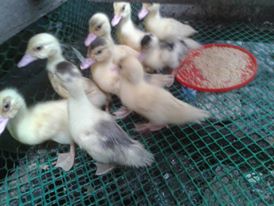 Muscovy ducks typically lives in farms in the Philippines. These domesticated animals live on darak or rice bran, insects, grass and seeds, worms, corn and any other feed stuffs eaten by chicken. Hens can lay 10-15 eggs as what we often see with our muscovy duck hens in Pangasinan. These wonderful creatures are fun to raise, as they show unique traits as farm animals. 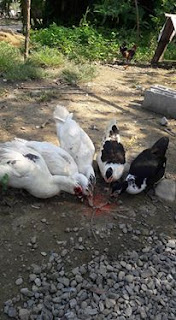 Breeders can be bought from nearby muscovy duck raisers since these type of ducks are so common in the Philippines. A good quality male muscovy duck from our experience should be the biggest male and exhibit dominance to other males. They must have at least one successful mating with it’s hen and produced surviving offspring. You can select any color for your stocks, but we noticed better reproductive pattern for pure white male Muscovy ducks to any other colored hens.

Ducks need a shaded and open area preferably fenced with net measuring 5 meters by 10 meters for 20 -25 ducks. Ducks need water and food feeding containers. They also need small water pool typically an old split tire will do. These ducks wash their feathers everyday and adding a mini water pool keeps them clean. Feeding can be done with rice bran rations to be fed in morning, at noon and afternoon. They also eat rice and vegetable peelings and fruits.

Muscovy ducks can breed up to three times each year. The hen lays a clutch of 8–16 white eggs, usually in a tree hole or hollow, which are incubated for 35 days. The sitting hen will leave the nest once a day from 20 minutes to one and a half hours, and will then defecate, drink water, eat and sometimes bathe. Once the eggs begin to hatch it may take 24 hours for all the chicks to break through their shells. When feral chicks are born they usually stay with their mother for about 10–12 weeks. Their bodies cannot produce all the heat they need, especially in temperate regions, so they will stay close to the mother especially at night.

These ducks are highly marketable. Your neighbor can be your first customer. Often, they are bought per piece. Big male ducks are often sold for meat and also due to higher weight means higher price. You can also sell to livestock market on your town. Dealers also come to buy in bulk. Finally, you can offer your ducks online. Facebook is also a growing platform since buy and sell groups can link your ducks to nearby and potential customers. Ducks are profitable since these animals are disease tolerant and cheap to raise.